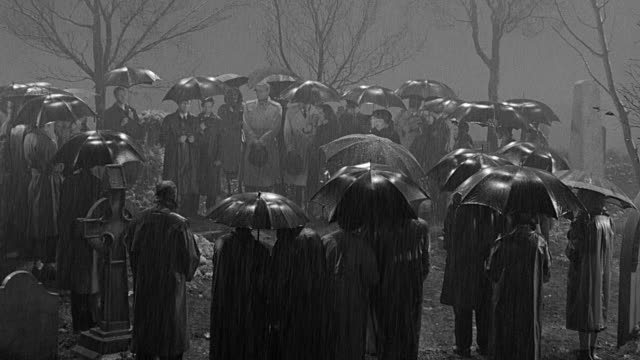 Because it is a funeral, or someone has discovered a friend’s death.

Because its eerie, a big house, a derelict building, a graveyard. Or the cars broken down on a country road.

I know you want to set the scene, make the reader ‘feel and see’ what is in your mind. But not like this; not again.

Hollywood and television overworked this format years ago. Mary Shelly used it way back in 1817… (yes, I know Frankenstein’s Monster was not published until 1818. 11 March 1818 to be precise! but Mary completed her work in May 1817). 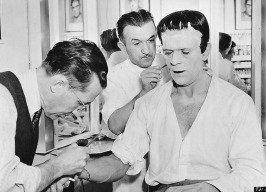 After that, I can understand some writers utilising Mary’s techniques (which she stole anyway!); but that was almost two hundred years ago! Surely you can work your wordsmithing magic without falling back on this old literary cliché?

Let’s take a look at the graveside scene again. This time, dismiss the notion of grey skies and rain.

Try and build that ‘feeling’ you want, let’s say, for this exercise, sadness and sorrow. (Although in another version it could be joy and relief, dependent on your character’s viewpoint).

‘The solemn parade of black clad mourners slowly crunched their way over the gravel and melted into the dimness of the church, passing under the gothic arches of time worn stone’.

Here the tone is set using a few simple, but descriptive words, to create the mood. ‘Solemn, black, mourners, slowly, melted, dimness, gothic, time-worn’ All carefully selected words that imply the general emotion of the procession.

An alternative may be something along these lines.

‘James glanced at Mary, her eyes glistened as tears formed. Small dew-drops of sadness sparkling, reflecting in the sunlight. The scent of yew trees and grass added to James’s sense of numbness as he watched the coffin being lowered into the grave’. 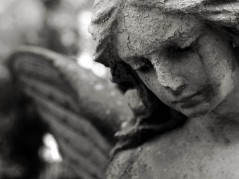 Approaching the scene from an oblique angle often offers the author an opportunity to ‘drip-feed’ the reader, only giving them a small bite sized piece of the overall scene with each sentence. This allows for an element of surprise, or revelation.

Neither of the above paragraphs have fallen back to the old ‘grey sky and rain’ chestnut. Yet they convey the very essence of emotion which one wishes to communicate with the reader.

Onto the scary stuff!

The haunted house? The killer lurking in the dark woods, the stranded car on that country lane.

You’re right, it’s NOT raining here either! No lightning, no storms and no doors banging in the wind.

So, how to get away from those ‘same old, movie style embedded notions’.

Well, let’s try. Let’s start with an approach to that (possibly) haunted house or old barn.

‘Two huge stone eagles balanced precariously on the dilapidated columns. The bindweed twisting about their talons as if securing them, denying them of flight. Framed between and beyond stood the old mansion house. The bright sunlight reflecting from the walls enhanced the blindness of long lost windows. Empty hollows, gaping holes beckoning us towards them’. 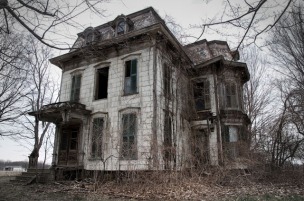 Note the ‘bright sunlight’. This time using the opposite, of what has become expected, to enhance the ‘darkness’, the brooding mood.

Not a raindrop in sight and the clock is not about to strike midnight!

As for breaking down on a country lane, perhaps having to abandon your vehicle to seek help…Let’s attempt to approach this in an unexpected style too.

‘He had been foolish for stopping; but nature would not wait and the hedgerow of holly offered the ideal shelter to hide behind while he answered her call. The car was going nowhere. The tyres just spun in the deep snow. With each attempt they sank lower until now; now the car was axel deep. He was stranded.

In the far distance the occasional puff of smoke drifted upwards into the crystal blue, cloudless sky. Turning his collar up, ramming his hands as far into his overcoat pockets as they would go, he started to plod through ankle deep snow towards the smoke. Gregory guessed it was from a cottage chimney. How wrong he was…’

Here I have constructed the paragraphs to portray a relatively normal situation, feeding the reader small tidbits about the weather, not only to ‘set the scene’, but as miss-direction, so that I can increase the effect of the final few words.

I beg you, if you are about to write, (or re-write), a section of your novel where you have been sucked in by the old ‘rain & storm’ caper, alter it. Dismiss the rain; freshen up your narration, pleasantly surprise your readers with something new and exciting.

Please do not let the rain make your book a wash-out.

Thanks for reading, Paul

Oh, don’t forget to read the new edition of CQ Magazine. It is jam packed full of great ‘stuff’! 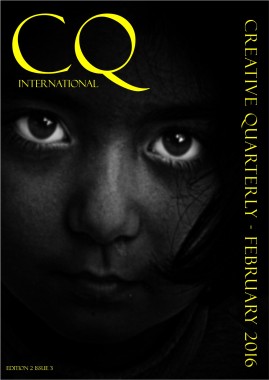 2 thoughts on “Don’t let the rain drown your novel”