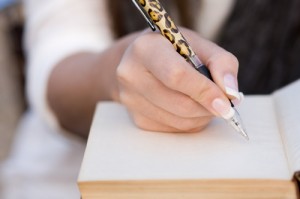 But first, here are a few bits of book lore authors may not know.

By tradition and convention, authors should always sign their books on the title page, the page which has the author’s name printed on it, generally under the printed title of the book or nearer the foot of the same page.

If the author wishes to add an inscription, a message along with their signature, it should also go on the title page if it is very short, about a word or four in length. Longer inscriptions should be written on the half-title page, the page preceding the title page, or on the front endpaper, sometimes referred to as the flyleaf, if of a serious length.

An old tradition has the author put a line through their own printed name when they sign their name on the title page.

There are, by historical anecdote, two views of why this practice is undertaken.

The first, is a book only needs a single validation attributing its author, the authors own handwritten signature makes the printed attribution unnecessary, hence it is crossed out.

The second accepted reason goes back to the earliest days of printing when it was the practice for authors to sign each copy of the printed material by hand as proof of their authorship, a kind of early copyrights protection if you will.

My own view is, the tradition of crossing out one’s name arises from a combination of both, developing over the years as the printing revolution gained credence.

I do like the thought, even nowadays, these hundreds of years later, there is some conservative part of us writers who continue this practise as a nod to our literary forebears. That we authors like to keep a connection with our history and heritage.

Another tradition for book signing is when someone asks you to sign or personalise their copy. (This is inclusive of book signings, or under any other circumstance.) Say the person is ‘George’, then the author should write the words ‘For George’. ONLY if the author is giving the book as a gift should they write the words ‘To George’. (Note Stephen King’s inscription in the above photograph).

Of course, these are only conventions, accepted literary etiquette and in no way are enforced rules or regulations. Authors can sign any way they wish.

I do hope, however, you are one who embraces historical values, discernment and class.

Here is what some established authors say on the matter; 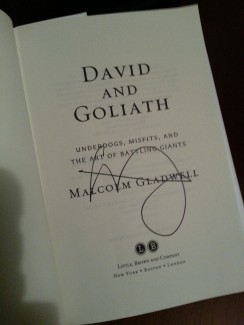 Tom C. Hunley says. “I asked Rodney Jones, American poet and retired professor of English at Southern Illinois University at Carbondale, why he crossed his name out in a book he signed for me. He told me it makes it more valuable for collectors. Also, if it has a date and location, it makes it even more valuable. So, I’ve been crossing out my name and writing in a date and location at every book signing since.”

(Tom is the director of Steel Toe Books and a prolific writer and Professor of English at Western Kentucky University in Bowling Green, KY.)

Nicholas Belardes, a Chicano writer of speculative, literary, YA and MG fiction said, “Sometimes I cross my name out and sign. I do it out of respect for myself, for the idea of accomplishment, for the idea that writers are real people, that we can touch our manuscripts in ways that transcend the printed objects they’ve become. Our works become even more personal this way because our signatures are more physically attributed to us in the world than even fingerprints.”

“I do it. My understanding is it dates to the historical tradition of small press runs, where the author would hand-sign each copy as an authentication of the text.” Sandra Beasley, American poet and non-fiction writer from Virginia.

Note: Sometimes authors sign additional copies, ones intended for future sale by the store or organisation where the signing is taking place. This is encouraging for people to purchase the book from and even attract custom to, that retailer.

However, there is also an ulterior motive; once a book has been signed, it is no longer classed as a ‘new’ book according to many publishers’ rules. Therefore, it cannot be returned to the publisher for a refund by the retail vendor. (Neat trick or not. I guess it depends on your viewpoint?)

Okay, now we have those tidbits of information, let’s get on with the reason why you might take signing your book as a very serious matter…

When you buy a signed book, you are purchasing a signature, but when you buy an inscribed book you are getting a story.

One of the questions I’ve been asked often is “Which is better, having a book signed by the author or having them inscribed it?”

Without any hesitation, my answer is the more writing by the author in a book, the better. I even encourage collectors to have their own copies personally inscribed by the author whenever they can.

For a long time, generations, literally, there was a clearly established hierarchy of values pertaining to books signed by their authors.

Next best are the association copies, books inscribed by the author to someone notable or important in the author’s life, a relative, a friend, a mentor or possibly another writer.

After that were ‘presentation copies,’ which means the books inscribed by the author to someone who was not (as) important to the author, or whose importance was unknown.

And finally, at the bottom of the hierarchy, are books that are just signed, with no further inscription, no other writing, etc.

The logic of such a hierarchy is more or less self-evident.

The dedication copy is usually unique or, at most, limited to a couple of copies, inscribed by the author to the person he or she thought important enough to dedicate the book to, in print.

Association copies involved significant figures in the author’s life (or in the general cultural life of which the author was a part) also have a self-evident value, although not one as unique or specific as the dedication copy.

Presentation copies are more ambiguous, the mere fact a presentation copy could sometimes, with a little bit of research, luck, or specialised knowledge ‘become’ an association copy argued for their importance, and the closeness of the two in the hierarchy.

Signed books are last, and there is the suggestion of a ‘taint’ to them, as though the only justification for a book having an autograph is celebrity worship which is inappropriate to the book (literary) world.

Because this preference is clear and longstanding in the book collecting world, dealers prefer to have presentation copies over plain signed copies, collectors prefer them and there is a premium placed on their price in the collector’s marketplace.

Now, a true story of how this hierarchy was thrown into turmoil…

An enterprising bookselling from the New York area, recognising this preference, decided to exploit it, relentlessly.

Somewhere in New York, even before the days of routine author tours on the publication of a new book, there were author readings every day. The same with lectures, talks, and seminars, most open to the public. 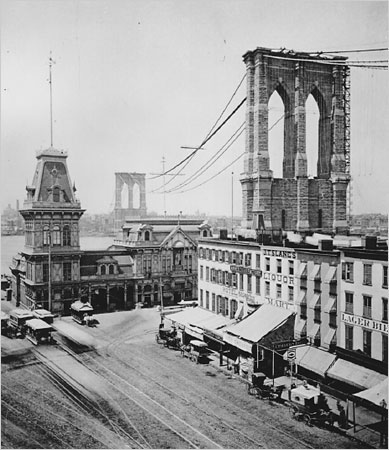 Frequently one could visit several in a single day.

The bookseller in reference was a family business. They attended many readings and talks, en masse; often five or more family members at each, all carrying a bag full of the author’s first editions. Each asking the author to inscribe the books to them personally.

Then, when they issued catalogues, nearly every book was listed as a ‘signed presentation copy, inscribed by the author’, a most desirable designation, especially for modern first editions, many of which are not inherently rare unless there is something special about a particular copy.

This exploitation continued for several years. As it did the family grew bolder, branching out its operation to reach more authors, those beyond the boundaries of New York.

Stories began to circulate among writers as they began to receive identically worded, ingratiating letters from a correspondent claiming to be the author’s greatest fan and sending a box of books to be inscribed personally before being returned.

Some writers began noticing the ‘fan’ would then write a follow-up letter some months later, sending another batch of books to be inscribed,  often including copies of titles the author remembered signing previously.

Authors began to dislike it, feel manipulated, deceived and exploited. Several undertook to go along to bookshops and signing all their books in each store.

Booksellers eventually recognised the fraud of these ‘signed presentation’ copies. Whereas a plain signed book carried no such taint.

Collectors began to absorb the preference for plain signed books the booksellers now favoured, although they did not realise it was only the books inscribed to this family’s members which were ‘tainted.’

The public’s perception (wrongly) grew that all inscribed books were now less desirable than those which were simply just signed by the author.

The whole episode created a self-fulfilling prophecy: if collectors’ value inscribed books less than books which just have the authors signature, for whatever reason, it becomes far more difficult to sell inscribed books than those which are signed…. The perception of which is, it ‘proves’ inscribed books are less valuable…. and so, the merry goes around.

Such a view not only defies long-established historical precedent it also diminishes and demeans collecting.

A Hemingway book inscribed to Cohen would, at the time, be a simple presentation copy to a person of no particular consequence. 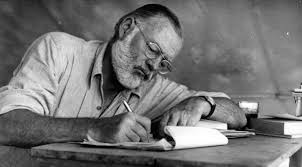 Today, it would be viewed as a highly desirable association copy.

Similarly, if Carl Peterson managed to get Faulkner to inscribe a book to him, it would now be viewed as a major association copy.

The time-honoured practise of identifying books from an important collection, ‘the Doheny copy‘ or ‘the Bradley Martin copy,‘ for example, underscores collectors themselves can become significant figures.

Perhaps, most telling in terms of underlying values is the cases of long-dead authors like Hemingway, Fitzgerald, Faulkner, Steinbeck, Joyce, it is true a presentation copy has a higher value in the marketplace than one which is just signed.

They are more interesting, they can provoke interesting questions leading to discovery, which is one of the pleasures of collecting and ‘the more writing by the author in the book, the better’ is still generally the accepted truth in this market.

Now, this is where it matters to you most…

Since we do not know, cannot predict or even guess who will be part of the next generation of Faulkners, Hemingway’s, James Joyce’s or even Stephen Kings, is there any reason different criteria should apply to the inscriptions of we contemporary authors than to those we now deem as ‘classic’?

I don’t think so.

Therefore, I suggest you take your book signings very seriously indeed, because one of those people may well be you, or me, or… maybe it will be the author who just inscribed your copy of their new book.

If you want to know more about creating books, your covers, being indie, the publishing or printing world, editing, Copyright, ISBN’s, or what each part of a book is called and what it does, then you are in the right place.

I have two books especially written to give authors and writers a ton of useful information. These are NOT ‘how-to’ books or ‘step-by-step’ guides but a distillation of my time and experience as an indie.

These books chapters are rammed full of helpful and useful information about everything concerned with indie authoring your books. These books will save you time, effort and money along with saving you making a ton of mistakes and suffering the anguish which goes along with it… because I have already been there, done that & got the Tee-shirt on your behalf. 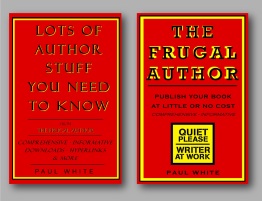 Lots of Author Stuff You Need to Know <<< >>> The Frugal Author

Follow Ramblings from a Writer's Mind on WordPress.com
Join 3,020 other subscribers