Be it poetry, the opening scene of a short story or an emotive section of a novel, the colour black is often utilised by writers to project or convey a ‘certain feeling’ to the reader.

But how many of us have actually considered why we perceive black in the way we do?

As one of the tools in our wordsmithing armoury should we not understand why the word black can be such a powerful device?

Generally black embodies the values of death, depression and evil. It can be used to describe something terrible or maybe a void.

But why do we identify black with badness, immorality or malevolent actions?

It is common in our society to use the word black as an exclusion, such as blacklist, black mark, or black sheep. We also apply it to people who we perceive of unpleasant actions, such as saying they have a black heart or black soul.

You may say it is because one wears black to a funeral, or it is the colour of mourning. But that is not necessarily so. In other cultures, such as China and India the traditional colour for mourning and reflecting death is white.

Not until Bollywood adopted and merged some western ideology into the Indian cinema, would you ever see anyone wearing anything but white sari at a funeral. In fact, it would be considered impolite to wear black at any Hindu funeral.

Much of this form of the perception of black is a Christian/Western opinion based on ancient observation or teachings, much based on historical legend.

Ancient Greek myth has it that at the beginning there was just ‘Chaos’ or Khaos. (This does not mean ‘Disorder’ in the contemporary sense, but rather ‘Chasm’, in the sense of a dark, gaping space).

Khaos gave birth to Erebus, the darkness of the Underworld and Nyx.

Nyx was the goddess of the night, one of the ancient Protogenoi (first-born elemental gods). In the cosmogony of Hesiod she was born of (Khaos) and breeding with Darkness (Erebos), produced Light (Aither) and Day (Hemera), first components of the primaeval universe. Alone, she spawned a brood of dark spirits, including the fates, Sleep, Death, Strife and Pain.

Nyx was a primaeval goddess usually represented as simply the substance of night: a dark veil of mist drawn forth from the underworld which blotted out the light of Aither (shining upper atmosphere).

Even in Nordic legend black has a prominence. The fire giant whose sparks made the universe.

Surt is the King of Fire in Norse mythology, the Lord of the Fire-Giants of the realm of Muspellheim.

In the beginning, there was only the blackness of Ginnungagap, and then Surt appeared out of the blackness with his flaming sword and touched the land, it lit up and became the Realm of Fire.

Eventually, it drew close enough to Niflheim, the primal Realm of Ice, that it warmed and melted the frozen earth, revealing Ymir the primal frost-giant and Audumhla the Great Cow. In this way, life was created from the meeting of fire and ice.

With these ancient wisdoms and beliefs being passed down the generations it is no wonder that darkness, that the deep black of night still has a resonance of anxiety and apprehension within us all.

Modern knowledge may have more acceptable theories such as the big bang, yet even here it is suggested that it was many thousand millennia after the bang before the first stars began to form, which is almost inconceivable to comprehend.

The thoughts of endless night, a total void of nothingness, a black hole encompassing the entire universe is frightening to most.

So it is not surprising that based on tradition, folklore, socially established conventions and custom that we westerners perceive black to hold the qualities of evil, depravity and immorality. Much of this is due to our cultural dread and fear of the unknown, the unseen and the minus light of darkness.

Now, add a touch of Hollywood movie conjoined with mass media and you have an ideal breeding ground to spread rumour, fabrication, falsehood and fiction, all of which so easily becomes assimilated into the psyche of modern society. 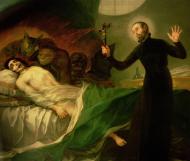 Suddenly black is the epitome of all evil, it is the quintessence of Goyan nightmares, of original sin, of death, of satanic rituals, black mass, sexual deprivation and transgression.

Black becomes the cloak of darkness for vampires, the shadow where werewolves lurk, forests of malevolent spirits and the embodiment of evil itself.

Because there is another side to black, a lighter, brighter side to this deepest of darkness.

Black is the new black.

The sleek aesthetics of glossy black fashion, a world of sequins, leather of obsidian jet chic and metallic black Ferraris.

Here is a transgression from black’s authority of depression and nightmare.

This is a juncture where modern mindfulness separates the black associated with the natural world, the world of dark recesses and shadows of mystery and myth, from the brighter black of the contemporary, enlightened and progressive world of today.

The little black dress, appealing, sensual, hinting at naughtiness, suggestive of excitement. This is sexy black, the black of lacy underwear, of thin straps revealing rather than concealing, the offering of promise.

Yet even here the evocative black is tinged with an inference of deprivation, of transgression from the acceptable. It is that, the allure of going beyond the boundaries, the immorality of wild or illicit acts which is attractive, which whets our carnal appetites.

The modern black, the black of this world is the white light black of Newton and Robert Boyle.

Therefore to know, to understand which black to choose when weaving that spell in your novel of dark fantasy, or which black to spill across the pages of a bloody thriller is a most important element.

Select the modern black, the industrial manufactured black for seduction and pride, for sex and sheen.

Take hold of the natural, the organic, ancient, primordial black which seeps uncertainty, drips terror and dread for your dark scenes, your night horrors and death itself.

Choose your darkness well my friends, write admirably and when the shadows of sleep creep upon your wearied eyelids, shutting the out the light, sleep soundly in the comfort of the black night……If you dare.

You may also enjoy reading some of my short stories at: https://alittlemorefiction.wordpress.com/ 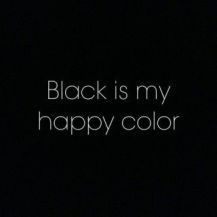