It may have taken about fifty years for ‘Go set a Watchman’ to be published, because of Harper Lee’s uncertainties!

It has also taken an awfully long time for ‘Miriam’s Hex’ to be published too.

This is the story behind the book. 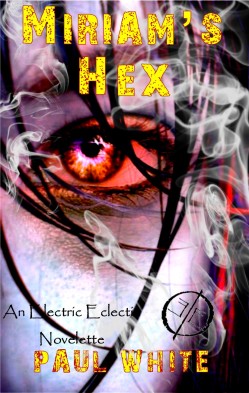 About four years ago in 2013, while having a household de-clutter I found an old cardboard folder in a box in my loft.

This folder contained many poems I wrote in the late 1970s & 1980s. Many were hand-scribbled, most were type-written, yes I did say type-written. (Using a typewriter.)

In this folder were scribbled notes for use in, or as, ‘possible and potential’ stories; old abandoned writings, half started tales, partial paragraphs and such like. It was a rather eclectic combination of various writings.

I was filled with personal wonderment as I read the sheets of yellowing paper. Here were my thoughts, my emotions, my ideas of a lifetime ago.

Some of the writings and poetry I recalled instantly, others staggered out from the mists of amnesia. I was amused by some, horrified by others; the amateur nature, the naivety, the bad grammar and misspellings.

All, however, transported me back to another time, another world, another life which was connected yet somehow detached from myself. It was like an out-of-body experience, but somehow less direct, less united.

Possibly that is the effect of passing years?

Bunched at the back of this folder was a wad of A4 sheets held together by a rusting paperclip. I started to read, it was an untitled story. A light-hearted black comedy, if it is at all possible, of selfishness, of greed, of impatience and latent curses.

Despite many changes, the crossing-outs and the pencilled notes, the story drew me in. As I read through, small pinpricks of memory began to seep back. This was a story, one of the few I wrote at that time, which had a beginning, a middle and an end of sorts. (Although throughout there were still many threadbare patches).

You see, I first scribbled out a rough draft of a storyline in 1978 according to the dates on the draft. This (first?) draft had no title and no end.

In 1980 I reviewed and re-wrote it, apparently. (I found a few margin notes to confirm this), although I cannot recall doing so. At this time I must have added the final few paragraphs so there was now an ending… of sorts.

It was thirty-five years later, after becoming a professional writer and published author, I rediscovered this early work, first started when I was in my late teens.

At first, I simply returned the manuscript to its folder, the archives if you wish. But something was nagging at me. This stories prmise was pretty good, it was something different, there was originality about it.

So, I pulled the manuscript from the dusty cardboard folder once more and began, letter by letter, word by word, to type it onto the computer, to re-write certain parts, to edit and eventually to complete the story. All the time I was doing the re-write I was conscious of not changing the basic story, not to expand or cut too much. I wanted, I felt I needed to keep the piece as close to the original draft, my teenage life’s draft, as possible to maintain the authenticity and not detract from those (my) original thoughts, while making it readable.

Once I was as happy as I was ever going to be, I gave the work a title for the first time. I called it Miriam’s Hex.

In November 2014, thirty-six years from its conception, I self-published Miriam’s Hex as an eBook.

Which brings this story up to date… almost… because now, right at the beginning of 2018 Miriam’s Hex has been re-edited and the cover slightly altered so it can be one of the amazing and wonderful Electric Eclectic Novelettes.

Electric Eclectic Novelettes are brilliant stories, told by some of the best indie authors in the world. They are designed to give readers looking for their next favourite read or seeking a new author to follow insight into the authors writing style and narration. They are introductory books if you wish.

Personally, I would love you to read Miriam’s Hex, not only because I am certain you will enjoy it, but because of this, the story behind the story of the book.

I hope it will not only add provenance to Miriam’s Hex but will lend encouragement to all the writers among you who, at times, have doubts and worries about their own works and the time it takes to produce a great story.

Thank you for reading my story.

It is September 2019 and Miriam’s Hex is once again evolving. Still under the Electric Eclectic brand, Miriam’s Hex is also now being published as a paperback, but not just any old paperback, a special sized ‘pocketbook’ paperback that makes it so much easier to carry in a bag, handbag or indeed a pocket, hence the name.

I’ll let you know once it has been released in this format.

You can find my books, including Miriam’s Hex and other Electric Eclectic books in the Amazon @open24 store

2 thoughts on “Harper Lee has nothing on me! Miriam’s Hex…….the truth behind the story.”